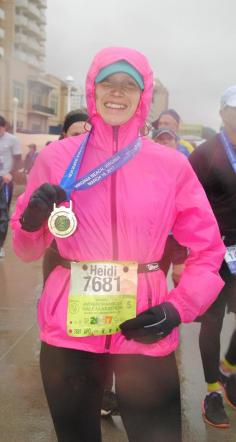 I almost forgot how to use this blog… it has been so long.  I’m not sure why because I switched from a full-time job to a part-time job during the last year.  I would expect to have more time, but for some reason I can’t seem to find it.  I’m not even sure what to write about, but that change is creeping up on me and I can’t avoid it so I might as well embrace it and talk about it.

Ever since moving from Colorado to Virginia I have lost my running mojo.  It didn’t happen right away because I brought the groove with me and finished my first 50K and 50-miler a few months after the move.  After that, it just started to go downhill.  Maybe the problem was that I couldn’t find any hills to run up.  Or maybe it was the loss of my running buddies.  I tried to make new ones, but that only lasted a summer.  I used my full-time job as an excuse to avoid joining any running groups.  Maybe swamps just aren’t the right scenery for me.  I’m not sure what it was, but it was probably a combination of everything.

I shared my joy of running with clients and the students at my school.  That was my way to stay positively immersed in the sport.  I wasn’t necessarily happy about my own running, but I could be happy for others and encourage them to work hard and take on new challenges.  That kept the light burning.

Then the real slump came when I trained hard for a marathon that started off great until I crashed and burned far from my goal.  After that I swore off marathons for over a year.  Then I decided that I had to run the Marine Corps Marathon since we live so close to D.C.  Once again, I failed myself even more than the last marathon.  After that marathon, I swore off marathons again as I recovered from a nagging knee issue.  My focus became directed at my job as a fitness instructor.  Running became something I just did as a form of cardio.  I needed my strength for boot camp and weight lifting.

Spring arrived and brought a handful of local races.  Fine.  I told myself I would do the local half marathon for St. Patrick’s Day.  It was just a half.  I signed up and sort of trained.  Maybe I did few long runs when I could.  I wasn’t always motivated to wake up early on a Saturday like I used to be back in the day.  Gosh,  I remember the times I would get up at 4:00 AM to train for marathons with Team in Training in Florida.  That took dedication!  I just didn’t have it this time around.  There was no waiting for me.

I just went through the motions and made it to race day.  Then I really regretted signing up.  It was the most miserable weather I have ever experienced during a race.  Not even a below freezing half in Colorado could compare.  It was pouring rain, freezing cold and extremely windy.  Yet, I knew I was tough and could just deal with the suffering (and I had paid way too much money for that stupid race).  Ready, set, go!  I totally kicked ass.  I don’t know how.  Maybe misery loves company.  But I ran hard and finished stronger than when I started.  It was one of my strongest races since that 50-miler 2.5 years ago. Did that accomplishment set a spark?  Not really, but it proved that I was still fit and more than capable of new challenges.  I’m approaching 40 here, so any little bit of encouragement helps.

I know I have been dragging my feet through the streets of Chesapeake, VA.  We are on our way out and I feel like it is time to make amends with running.  I am going to make the most of our new destination and figure out some way to bring back the spirit of running.  The same goes for the triathlon.  My bike has sat in storage for the past 3 years. It is time to bring it back out and get moving at 20 mph again.  I just have to make the best of what Puerto Rico has to offer and find ways to work around any obstacles I know I will face.  There is a 50-miler in December…wonder if I should sign up?