The year 2017 was not my most notable as far as my running is concerned.  I am pretty sure the farthest distance I ran was 13.1 miles.  It was notably the worst half-marathon conditions I have ever encountered, so that has to be something.  Prior to 2017, at a bare minimum, I ran at least one marathon per year.  However, 2017 was a busy year; a tough year; a year that will not be forgotten.

The year started off like any other year.  I liked my three jobs:  working as a fitness instructor at the YMCA, as a personal trainer at the Virginia Beach Rec Center and as a coach for my own business.  I was working out every day doing a variety of exercises so the time I spent running was less.  I suppose that makes sense.  I felt healthy, fit and pretty darn happy.

Then the spring brought a sense of impending doom.  We requested to be rooted in place (it’s called an extension in the military world), but we were told that we had to move on… to Puerto Rico of all places.  It sounded exotic and adventurous, but as our children get older our priorities focus on their education.  I wasn’t so sure about how we would get our oldest through high school without too much uprooting.  Eventually the idea grew on us, but we had a lot to get done.  We had to pack up and sell our house.  I had to notify all of my clients and I wondered if the past year of training was for nothing if I couldn’t continue on this path.

It all kind of turned into a nightmare (only the beginning of course) when we had our house sold, but no official orders to start the moving process.  Eventually we received the orders, but were told that the earliest move out date was the end of July…um, we had to move out of our house by the end of June.  So, we figured it out.  It was the HARD way of course.  We had to take care of all of the logistics ourselves, rent a container, pack up everything OURSELVES and move it all into the shipping container OURSELVES… and then plan to unload it all on the other side OURSELVES.  I was a little bit of a crazy packer with double bins in some cases and inventory sheets on every box or bin.  Ironically (this will come to play later) I was a bit glad I was packing meticulously and not random people who don’t really care about our stuff.  Okay, it’s ironic because maybe we would’ve lost a few items in the move due to poor packing by movers, but all of our stuff would’ve still been a shipping container during the hurricane (which I will discuss later). 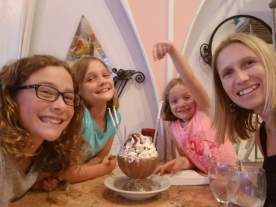 Our house was sold and we were moved out!  The BEST part of 2017 was the road trip I took with the girls.  We went from Virginia to Washington D.C., on up to New York City, over to Providence & Newport Rhode Island, a quick peek at Niagara Falls, a week with family in the Cleveland area, up Michigan to Mackinac Island, further up the Upper Peninsula to Painted Rocks, cut across and down Wisconsin, all the way across South Dakota to check out Mt. Rushmore and the Cave of the Winds, down to Colorado for a week to visit old stomping grounds and good friends and then back across to Virginia.  Whew!  We saw a lot of neat things, did a lot of fun activities and ate a lot of good food.  I hope they remember the road trip of all road trips with their awesome mom!

By the completion of the road trip, we were excited and ready to hop on a plane to meet up with my husband/their dad in Puerto Rico.  Our house on base was not ready for us so we “moved” into a temporary guest house that was not quite ideal (only one bathroom), but seemed suitable for short term.  Yet, short term quickly became long term and our family is currently busting out at the seams.  So, here we were in a guest house, but since the government had not moved our household goods it only took about 2 weeks for the container to arrive on the island.  Household goods, but no house to put them in (so ironic yet again).  Therefore, we had to put our household goods in a storage unit.  The good part about that being that we could grab a few items (just not too many because we had no space), but I fortunately grabbed important papers and photo albums. 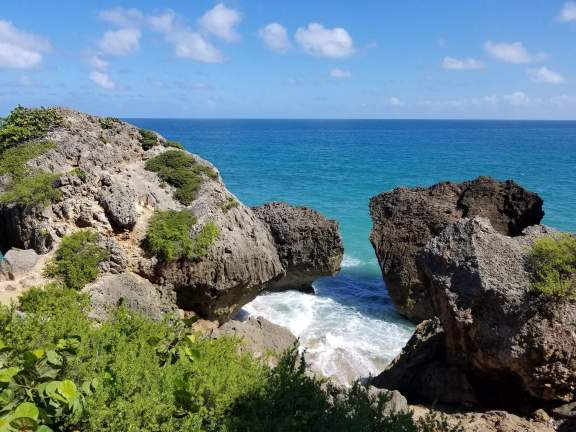 A short walk down to this beach.

Puerto Rico quickly grew on us.  We made friends, found our way around, learned how to drive (yes, there are different rules here… no rules at all), explored new beaches and ate a lot of great food.  The girls started school and seemed to enjoy their classmates and teachers.  Our oldest found a swim team, the youngest started Spanish classes and I was getting ready to start a kids running group and adult boot camp.

Then Hurricane Irma came around and gave us all a scare.  She was mostly just that… a scare.  We lost power for a few days, had debris to clean up and missed a few days of school.  We felt soooo very lucky.  Our community worked hard to help the other islands who had been hit much harder.  We gave them food, water and other needed items.  Things started to go back to normal.  School was back in session and we got right back to the beach.

Then Hurricane Maria loomed out in the ocean.  We watched as she set her eye on our island.  We all knew it would not be a good outcome.  The Puerto Ricans knew.  The shelves at the grocery stores became bare and bottled water could no longer be found.  A Coast Guard C-130 landed at the airport and it had room for passengers.  That day was my worst day of 2017.  My husband wanted us to get on the plane, but I didn’t want to go.  Most of me didn’t want to leave, but a small part of me wanted to do what was best for my children.  I debated for many hours.  I debated all the way up until I saw the plane on the tarmac. I hesitated at the sight of families boarding the plane.  We were the last ones to board.  That day was the start of many tough decisions I had to make throughout the next few months.

The days that followed were pure torture.  I had no idea what was happening in Puerto Rico since we had no communication with my husband.  Our world had been torn apart and it sucked.  It sucked me down so far that I had to do everything I could to force myself to run a mile or two every other day.  At times, I could barely move, but I had to keep going for my girls.  After a week we realized it would be a long-term situation so I temporarily moved the girls back to Virginia.  We lived with a friend and I drove them 30 minutes one way to school each day.  At that point, all we had was one carry-on bag each.  The support from family and friends was more than we could have asked for.  I wouldn’t have been able to do it alone. 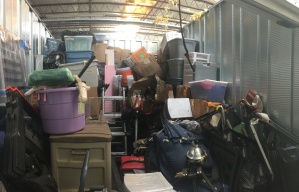 Note the sunlight coming into our storage unit due to a damaged roof.

Eventually, main roads were cleared on the island and my husband was able to stock up enough fuel to make a trip to our storage unit.  It was another low point for us in 2017.  The roof had ripped off our storage unit and Hurricane Maria poured inside.  All of our furniture had soaked up water and was useless, as did most of the items packed in

Anything packed in cardboard boxes was a total loss.

cardboard boxes.  The only items salvageable were those places in bins or bagged up tight.  To this day, we are still sorting through these items that my husband (with the help of some great people) managed to bring back to an empty house on base.  The rest is still sitting in that storage unit and we have yet to get an insurance claim finished because things in Puerto Rico move much too slowly and hurricanes don’t help with the process.  It’s all good though.  We are still in a guest house anyway.  What would we do with an empty house?

Puerto Rico is still in shambles and many people still do not have electricity or running water, but our family had to make another decision about when the girls and I would return.  I couldn’t live with a friend forever and we wanted our family reunited.  We wanted to be home.  Just a few weeks ago we returned home.  Things aren’t the same as they were when we first arrived in the summer.  It was a new kind of adjustment.  I am still adjusting and probably will be for a while.  Maybe it will be better when we can finally settle down in a house and start to rebuild what we have lost.  I am still running.  I just run slower and not so far.  I try to take it one day at a time and have to re-figure out what happiness looks like at this moment.  Happiness at Christmas last year was a real tree we picked out together, presents and full stockings for everyone, lots of homemade cookies to give away, a huge meal with seafood as the main course, driving around to look at lights, Christmas music blasting in the car and movies on the couch.  This year, happiness was just being together around our fake tree we managed to find at K-Mart and feeling thankful that all of our ornaments had been stored in plastic bins.

I know our lives have been forever changed by 2017, but as I head into 2018 I know I am even stronger than before and if shit hits the fan I will be ready.  But let’s just hope for an uneventful 2018.  Please.  We need to breathe and pick up the pieces just like everyone else on this island.