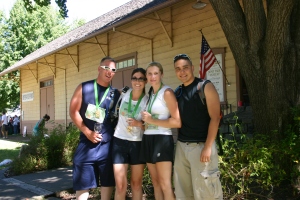 Napa to Sonoma half marathon

Bridget and I met while attending San Francisco State University’s teaching credential program.  We became friends the first time we started talking to each other at lunch.  It was awesome that we had all of our classes together and we even got selected to student teach at the same school right down the road from where we lived.  Of course we spent a lot of time attending classes, studying and teaching.  I don’t think I was really involved in a lot of physical activity during that time…. I was too busy trying to get through the program.

That’s why I really have no recollection of whose idea it was.  At first it was a trail run 5K.  Somehow we talked our significant others into doing the race with us.  Maybe I realized that running would help me burn off the baby fat that was still lingering even though my daughter was already 2 years old.  We ran that hilly 5K pretty well and even came in on the top 10 list… okay, so maybe there were only about 20 runners in the whole event.  I suppose that sparked the next plan.  We were going to run a half marathon.  Not just any half marathon, but the one that would take us through the vineyards from Napa to Sonoma where we would finish with some free wine tasting.

Bridget and I trained.  We ran longer and longer distances.  I remember the longest was the loop that went past her house and my house along the bay.  It was a nice run and our paces seemed to fit well together.  We would often listen to music and occasionally engage in conversation.  We suffered together.  We were able to motivate each other and make it to the start of that half marathon feeling like we could actually finish.

Bridget’s boyfriend at the time (now husband) decided that he would run the race with us.  Yeah, he didn’t train for the event, but do men ever have to train for those things?  I was surprised that my husband came, but didn’t run with us.  He could also do it on a whim if he wanted to.  Yet, he remained my best supporter and race day photographer.  The night before we all went out for pasta.  The boys insisted on wine, but Bridget and I refused. We had worked too hard to let it all go.  Besides, wine would be waiting for us at the finish line.

I remember that it was a very warm day and the vineyards never seemed to end.  I don’t think we expected quite so many rolling hills, but they didn’t bother us so much.  Finally, the finish line was in sight.  It never felt so good to cross that line.  We had just finished our first half marathon!  Wow, that was quite an accomplishment!  Too bad we weren’t really in the mood to enjoy our free wine… but the mexican food was great.

After that, Bridget and I planned to run the Rock n Roll half marathon in San Jose, but Bridget wasn’t able to finish the training due to an injury.  Yet, she was still there to cheer me on as I ran my second half marathon.  We kind of tried to keep up with each other after that.  We did a few smaller races and eventually it was time for me to move to Florida.  It was hard, but we found new running buddies and we kept running.  Bridget and I eventually finished our first marathons.

The last time I talked to Bridget she was still pushing that jogging stroller.  I look forward to running with her again!  She was my motivation to achieve greater things.  I may never have finished a half marathon if it weren’t for her.  Thank you Bridget!