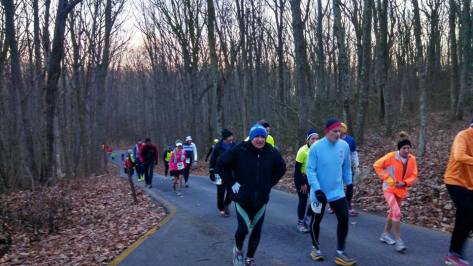 Yep, these runners are walking up this hill at around mile 5.

The JFK 50 was a pleasant experience in so many ways.  I know that sounds a tad crazy, but it went better than I could ever have expected!  Maybe it was just my lucky day or maybe I trained right.  Regardless, I just want to pass along some things I learned about training for and running an ultramarathon.

Fortunately, I have my own certified running coach: me.  I know how to kick my own tail.  I develop my own training plans based on what I have learned and the research I have done.  Regardless of where you get your training plans and whether or not you have a coach, the most important thing is to follow that plan.  Don’t be tricked into saying to yourself “Oh, I can’t squeeze in 6 miles, so I will just do five.”  That will soon become a habit.  Then you might be saying “It will be okay if I miss my run today because I can make it up later.”  Sometimes things come up that you can’t help (like you come down with the flu), but if your schedule doesn’t allow training for an ultra, then you shouldn’t be doing one.  I have a full-time job, a coaching business on the side and three small children.  Yet, I still have time to train because I make the time.  If you can’t make the time to follow a training plan, then try something not quite so challenging.

2.  Your training runs are practice runs.  Learn what to do and what not to do, then just do what works.

In the week leading up to the JFK 50, there were quite a few people posting questions on the facebook page.  A few of them didn’t make sense to me.  People were asking questions like what they should carry for hydration and what they should be eating.  Seriously, if you didn’t practice that during your training runs, then I am not sure what to tell you.  It got to a point where I had to post a reply: “Just do whatever you did during training!”  I wore my hydration vest and carried food during training, so that is what I did during the race.  Sure, if I were trying to win then maybe I would want to lighten my load, but all I wanted to do was finish and I knew I could if I stayed hydrated and well-fueled.

3.  Practice walking during your training runs.

I know that this sounds odd, but trust me, it is a hard thing to practice if you are a runner who has never done an ultramarathon before (or a runner who has never set foot on trails).  I had trouble finding the patience to do this during a 20-mile run because I knew that I could run the entire twenty miles.  However, I compared time for two 25-mile runs… one involved running the entire way and the other one included intervals of 25 minutes of running with 5 minutes of walking.  Do you know which time was faster?  The one that included the 5 minute walk breaks!  I wasn’t able to be 100% consistent during the race, but I focused on walking most of the hills and running the flats and downhills.

4.  The most important part of your body to train is your mind.

At around mile 35, I heard a runner say to another runner “I left John behind.  He was in a dark place and I couldn’t get him going.”  Every now and then I would wonder when I would hit my “low” because I naturally expected it to happen at some point during a 50-mile run.  I used to hit walls during marathons at around mile 22.  I just thought that maybe it would be later for an ultra.  However, it never hit.  I never experienced a low point during the race.  Okay, at mile 46 I sure as heck wanted to be done with the race, but I was able to speed up and keep my focus on the finish line.  In order to train your mind, you have to experience some of the crap that comes along with training.  During one 24-mile training run, I struggled during the last 4 miles.  My struggle was so intense that I had to repeat a phrase over and over: “One foot in front of the other.”  I felt like I could barely put one foot in front of the other.  If you don’t have tough training runs, then you won’t know how to be prepared for whatever challenges you face during the race.  If you are prepared, then you have less anxiety.  You also have to run long and run far.  They say back-to-backs are good to do since you run on tired legs the next day.  Sure, that gets you physically prepared, but you HAVE to run for a long time without any breaks in order to get the true experience of what it will mentally feel like on race day.

5.  Train on the terrain you will run on race day.

The first 15 miles of the JFK are up and over a mountain on the Appalachian Trail.  I spent all of last winter running trails in Colorado.  Even though it has been awhile since I have been on a “real” trail, I still had that knowledge of trail running.  I also took advantage of whatever trails I could find in my local area (even though they were a far cry from mountain trails).  I also did hill workouts in preparation for the climbing.  Not only that, but 26 miles were on a long and boring (but very beautiful) section of the C&O canal.  If I could count how many times I experienced long and boring running around Chesapeake… Oh, and let’s not forget, if the race doesn’t allow music, then you probably should train without music.  Honestly, I wasn’t very bored at all during the race and I actually felt like those 9 hours and 55 minutes just flew by!

This kind of goes along with #2.  I actually wore different clothes than I had been training in for the past 6 months since the weather was a whole lot colder.  However, as mentioned before, last year I ran through a Colorado winter.  Also, I had prepared to eat a variety of foods, but I decided not to pass up Christmas cookies and red velvet cake.  And no, I never tried those during training.  However, I do know that I have an iron stomach.  I once spent my first trimester of pregnancy stationed on a ship in the middle of the Bering Sea during winter… and I never threw up.  If you have a sensitive stomach, then skip the red velvet cake because you don’t know how it will affect you.

Females are actually better able to keep their minds in the right place during distance races than males.  I know, I know… I didn’t do the research, but I will tell you that the only complaints I heard came from the mouths of males.  I remember this one specifically: “I just want to get off this canal trail!  It is so long!”  I seriously wanted to punch this dude in the face.  How dare you speak negative out loud while I am enjoying time in my happy place??

It is a once in a lifetime experience… well, maybe more than once if you are truly crazy!  One runner has finished that race 45 times!

Even if you follow all of these tips and every other tip you read in all of the books, you can’t always be prepared for what mother nature or mankind might throw at you.  It could snow and a thick layer of ice might form on the trail.  There could be a train you have to stop for (as in the case with some JFK 50 runners).  Maybe there is freezing rain in subfreezing temperatures (only 17% of runners in 1974 finished the race due to these conditions).  Or you acquire a nasty virus the day before a race.  The point is, you just never know what could happen so tuck away a Plan B.

3 thoughts on “50 Miles of Lessons Learned”