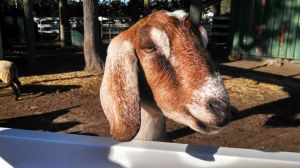 I would much rather be chased by a billy goat that wants to eat my clothes than by an aggressive dog that wants to rip apart my flesh.

Most people don’t think about dogs when they run, unless they are running with a dog.  I am constantly on the lookout for dogs because they pose another threat that must be taken seriously.  Unfortunately, there are dog owners out there who don’t take proper care of their dogs or who teach them to be aggressive.  A couple of years ago, there was an article written in Runner’s World:  When Dogs Attack.   It’s scary to think about what might happen if you encounter an aggressive dog (or a pack of dogs!).

I have been chased by dogs before.  Mostly little yappers that I could easily kick if they started nibbling on my feet.  Those little guys are usually all bark and will only chase you until you yap back at them and cause them to run away with their tail between their legs.  Just recently a large pit bull started to come at me from its spot on the front porch of a house. I could not see a leash and it was definitely not happy.  I wasn’t sure what I was going to do if it ran up to me.  Fortunately it stopped at the border of the yard.  I assumed that it was stopped by an electric fence, but how effective can those be if a dog really wants to get out? I decided to avoid that street from then on.

While running the backcountry trails in Colorado, I learned that is was smart to carry a knife, mace and a phone.  My biggest fear was mountain lions, but a pack of coyotes would also get my hair to stand on end.  A lone coyote, or even a pair of coyotes, never concerned me very much since they never seemed too alarmed by my presence and they were more common than not.  A domesticated dog off its leash seems to be more of a threat.  I find that the domesticated breeds tend to be more unpredictable than what you might find in the wild.  Once again, it all comes down to how they are trained and treated by their owners.

Yesterday I was out for a run through a decent neighborhood near my parent’s house.  Since I don’t live in this area anymore, I am pretty unfamiliar with the territory but I found a comfortable area to run through.  I was only a few blocks from the car when I heard something coming up behind me.  I turned my head slightly and noticed a dark figure running up behind me.  As I slowed and turned my body for a better look, I realized it was a very large german shepherd that was bounding towards me.  I did not see a person anywhere near the dog and it was definitely not on a leash.

The dog quickly caught up to me, brushed against my legs and wrapped its jaw around my lower leg.  If that dog had any ounce of aggression in it, my leg would not have survived the assault.  Fortunately (very fortunately), the dog was only intending to play and barely left a small mark on my skin.  However, I yelled at it at the top of my lungs: “No!  No! Get away!” and  I pushed it away from me very aggressively.  FINALLY, I heard someone call for the dog.  I looked up and saw a man washing his truck in a driveway down the block a few houses down and across the road.  I was livid.  I yelled to the man “You need to keep your dog on a leash!”  The man then had the nerve to reply “Why?  He doesn’t bother me.”  Fortunately, the dog ran back to its owner and I kept running toward my car.  I was so freaked out that all I could think about was getting out of there.  As I got in the car and drove away, I thought about the lesson I had learned.  I would do it all differently if I were put back in that situation.  Here are my thoughts on doing that again:

1.  Always carry a phone and a small knife when you run.  There is no need to get all crazy with the weapons, but this just shows that even a nice, quiet neighborhood can turn deadly if you encounter an aggressive dog.  Mace is a good idea for when you are further out in the country or out on an isolated trail.  You can buy mace that is designed for runners to carry.  I know that people think this is a bit much and they sometimes laugh at me for carrying a knife, but I won’t be laughing when I have to use it to defend myself from an animal or a human.  It is always a good idea to carry a phone because you never know when you might need to call for help.

2.  Get your own dog to run with.  That does sound a whole lot better than carrying a knife.  I have been dreaming about a furry running partner for a while now, but our busy lives aren’t quite ready for that type of commitment.  One of these days I will have my own personal running buddy and protector.

3.  If you do encounter a dog that is off leash, then stand your ground.  Remain calm and firm to get the dog away.  Running from the dog will only cause it to chase you.  If it attacks, then defend yourself in any way possible.  I really hate to think about this, but if a dog started chomping on me I would have to hurt it.

4.  Once you get away from the dog and are in a safe place, call the police.  Even though the dog didn’t necessarily “attack” me, I should have held the owner accountable for HIS actions.  His attitude only shows that he doesn’t really give a crap if his dog attacks someone.  If he had the decency to apologize and make sure I was okay, then I would probably reconsider the police involvement and make sure he knew the importance of keeping his dog on a leash.  I was even more irritated when I noticed the mark on my leg after I had gotten home.  The other thing that bothers me is his lack of concern for the dog.  The dog could have easily been struck by a car while crossing the moderately busy street to chase after me.

5.  The last thing I learned is not to tell your dad when something like this happens since his blood pressure will most definitely skyrocket as he makes threats to kick someone’s rear (well, other words were used but I will keep this post family friendly).  I was seriously pissed off about the owner’s response  and I think that anger was very apparant to my family when I walked in the door after my run.  If your dog accidently gets off leash or runs up to someone, please have the courtesy to restrain your dog and apologize.   That is what irritates me most about the situation.  People like that shouldn’t be allowed to have dogs.

Don’t get me wrong, I love dogs.  I have friends and family with dogs that I totally adore and enjoy hanging out with.  However, I do not like being chased by dogs that I do not know.  I do not like worrying if a dog galloping towards me is out to play or attack.